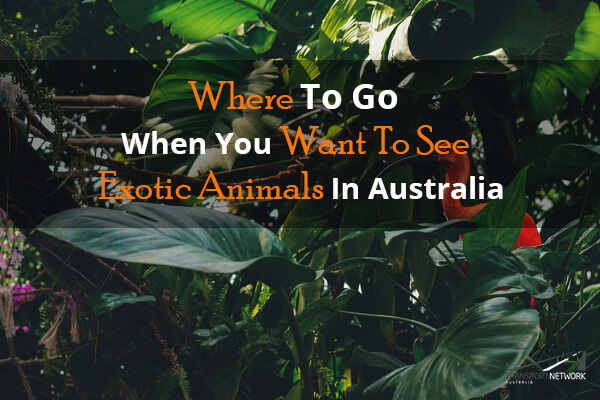 Australia is one of the most geographically isolated places in the world, being home to some unique creatures found only in this part of the planet. You must have seen some of the native species at the zoo, but it’s a different experience observing them in their natural habitat. From cassowaries to quokkas and koalas to kangaroos, these are some of the best places to see exotic animals down under. Book coach hire in Australia for a convenient commute to these destinations!

Known to be the third largest bird in the world, Cassowary is a mysterious creature that is rarely observed in the wild. Daintree Discovery Centre in Queensland is your best chance to catch sight of this exotic species.  If you are fortunate enough to spot a Cassowary, make sure to maintain a distance, as they are territorial in nature.

Renowned for canoeing and white water rafting, Nymboida River houses one of the largest platypus communities in the North Coast. You need to explore the river yourself to catch sight of these timid creatures. Hire a canoe and set up camp at Platypus Flat. The chances of catching a glimpse are high between the Nymboida Coaching Station and the Pollacks Bridge in late afternoon or early morning.

Known to be the only venue in the world where you can witness penguin in their natural ambiance, Philip Island is a delight for penguin lovers.  It’s a priceless joy to watch penguins wobbling up Summerland Beach and moving into their burrows every day at sunset. Do not forget to rug yourself up, as it can get really cold.

It is hard to spot the koalas, as they spend a lot of time taking a nap in Eucalyptus trees. But you can catch sight of these cuddly creatures at one of the places in the wild. Kennett River on Great Ocean Road between Apollo Bay and Lorne houses a number of Koala Colonies. The area around Kafe Koala and Grey River Road are hotspots. Look up the trees, and you may also find Blinky Bill grinding on eucalyptus leaves.

Emu is a flightless bird with a massive appearance belonging to an exotic bird species that have the capacity to even outrun Usain Bolt. They are often spotted in grasslands, however the ideal place to see them is Tower Hill Wildlife Reserve. In 1892, it was deemed as the first national park in Victoria, and today it is a perfect place to see echidnas, koalas, wallabies and kangaroos in their natural habitat.

With its sharp squeal,  it’s more common to hear a Tasmanian Devil than to see it. However, if you are really interested in witnessing the largest carnivorous marsupial in the world, then this is the place to go. Guided tours are available for visitors to interact with these energetic creatures.

It’s rare to spot a wombat as nocturnal burrowers. But you can catch a glimpse on Maria Island, off the eastern coast of Tasmania. These hairy marsupials can be observed waddling through the national park. You can access this island through a short ferry ride all the way from Triabunna.

Kangaroo Island is definitely one of the best places to witness one of the iconic animals of Australia, kangaroo. This isolated island is just a ferry ride away from Adelaide. The wildlife population here has flourished thanks to a number of conversation reserves and protected parks. Some of the best places to spot Kangaroos are Kelly Hill Conservation Park, Flinder Chase National Park and Lathami Conservation Park.

If you are looking for some adventure, head to the Ningaloo Reef to swim alongside the calm whale sharks. These filter feeding sharks are up to 12 meters long and are completely harmless. It’s a peaceful experience to swim alongside them. Depending on which season you are going, you may also spot manta rays, dugongs and humpback whales.

The only member of the genus Setonix, Quokka is a tiny macropod with a size that of a cat. Just like other marsupials, they are mainly nocturnal and herbivorous. They are basically found on some smaller islands off the Western Australian coast, particularly Rottnest Island, as well as Bald Island near Albany. The Rottnest has a dense population of smiling Quokkas .They are known to be camera shy and often pose for selfies. This island gives you a great chance to see these unique creatures in the wild, but you may be fined for feeding these furry residents.

The population of Numbats in Australia almost reached a point of extinction in the 1980s. There were only a couple of places where they managed to thrive. These include Dryandra Woodland and Tone-Perup in south-western Australia. Today, their numbers have increased, thanks to their re-introduction in a few more sanctuaries across the nation. Numbats are not quite friendly creatures, so you have to wait in order to spot them. Give yourself some time by staying overnight, as there are many accommodation options available.

Australia sea lion is one of the rarest seals in the world, thanks to extensive hunting in the late nineteenth and twentieth centuries. The population that survived has been protected in a few places. One of them included the Seal Bay Conservation Park at the Kangaroo Island. Beaches and sheltered bays offer plenty of spots for seals to relax, in between teaching babies to swim and fishing. You can either go for a guided tour or a self-guided one.

If you are travelling in a group to any of these spots, make sure to hire a bus not only for affordability, but also comfort and convenience.  A licensed local driver will take you to your preferred destinations, and you don’t have to worry about the directions.

Previous Article 10 Exciting Events In Sydney During November 2018
Next Article This Christmas, Where Should You Go In Australia?