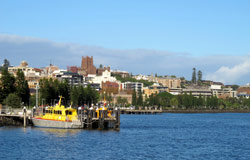 The Hunter River is well known across the world for its magnificence and many attractions. It is a major river in New South Wales, Australia. It Originates from Liverpool Range then it flows southwards then eastwards where it is headed for the Tasman Sea in Newcastle.

A brief history of the river

The Hunter River was discovered by some European explorers. It is said that in the 1790s, there were fishermen who sought shelter from harsh weather and they stumbled upon coal in the river bed. Initially they had named it the Coal River.

This went on from the year 1796, which is the year they discovered it until the year 1797 when they changed the name to the hunter river. It was named after John Hunter who was the Governor of the British Colony in charge of South wales during those times.

The river does a great service to the people since it is home to many tourism sites as well as agricultural projects. It also supports a whole ecosystem which is good for the environment. The following are some of the sites that you can look forward to in case you take a visit there.

The Hunter valley is one of the best sites to behold in the state since it has one of the best scenery in the world. It is unimpeded with mountains as well as other obstacles making it a breath-taking sight. It also comprises a vast lo lying land neighbouring the coast line. It is mostly known for many prestigious wineries as well as coal mining. You can also enjoy touring the many villages and towns in the valley and experience the culture of the people.

If you love horses, this is one of the best places that you can visit. The Hunter valley is known for breeding the best horses in the world.  It is a popular region for rearing and breeding thoroughbred horses. It is also home to one of the largest and most prestigious horse breeding regions in the world.

The estuary is fed by the river and some if its tributaries. It is a barrier estuary that results from sand and mud that has conglomerated over time. You can experience the vast forest land which is said to have more than 300 plant species that are indigenous to ash land.

The estuary is also home to many animal species including birds, bats, other reptiles and fish. It is known for being the host to at least 1% of the world’s total population of Eastern Curlews as well as Bar-tailed Godwits. You can even visit the commercial and recreational fish plants as well as the popular Hunter Valley School Prawn.