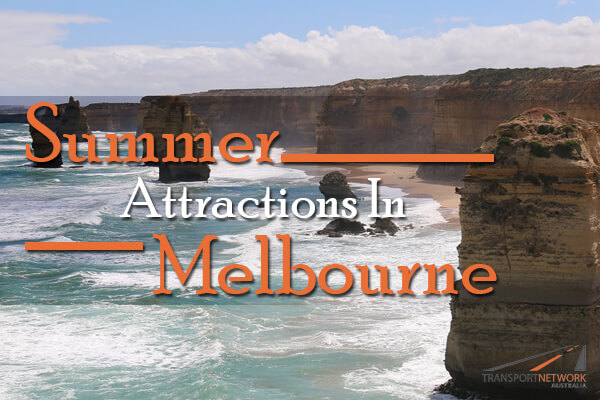 Melbourne is one of Australia’s most popular cities for tourists due to its beauty, diversity and the number of attractions. Whether you enjoy live music, festivals, museums or world class dining, you will find something here that’s a great fit for your liking. Below is a list of some of the hottest events that will be held this coming summer, and those in need of transport can use our coach hire in Melbourne for a ride that is both comfortable and reasonably priced.

Fans of Australian music will get an opportunity to learn more about its history and origins at Melbourne’s Arts Centre, which features a recently launched exhibition space. Visitors will get to take an immersive journey through Aussie music, which will feature images, instruments, recordings and memorabilia from the likes of Nick Cave, AC/DC, Archie Roach and more.

On Wednesday evenings visitors will get to check out the entertainment and food stalls which have been established for the Queen Vic Night Market, an event which has been held in Melbourne for many years. This will be the twentieth edition, and will include over sixty food stalls where attendees can eat delicious food including smoky barbecue, toasted sandwiches and other Western and Eastern foods.

Watch A Movie Outdoors At The Moonlight Cinema

Summer in Australia is hot and there is no reason you should be stuck indoors. One of the best ways to enjoy your evening is by watching a film outdoors with friends, which can be done at the Botanic Gardens. Bring along food and have your own picnic, or purchase a tasty meal from the food trucks which are available. The films shown here are diverse, some which will be popular with kids as well as adults.

Enjoy A Drink At Supafish

Supafish is a hot and trendy floating bar 38 metre in size which can be found near Ponyfish Island. Aside from its splendid neon lights, it has become popular for its margaritas, martinis, and the kombucha cocktail. This bar will leave an unforgettable impression, not just due to the outstanding drinks, but the fact that it is shaped like a giant fish which glows in the dark. No one in Melbourne has seen anything quite like it, and it is the perfect place for relaxing with your friends.

The Exhibition of Amy Winehouse

Amy Winehouse was an extraordinarily gifted musician known for her expressive, profound contralto voice as well as her ability to perform in a variety of genres, such as jazz, R&B and Soul. This led to her winning multiple Grammy Awards, but unfortunately her struggles with alcoholism led to her untimely death at just 27 years of age. The Museum and exhibition in Melbourne was designed to commemorate the life and achievements of this gifted musician who left the world too soon.

This is one of Melbourne’s most successful night markets, and has returned for another year. Those who have never been to it before are in a real treat, as they will get to enjoy live music, interesting people, design stalls, and all the great tasting food you can eat. It is a very laid back, relaxed atmosphere where you can dance all evening and mingle with other guests.

The Inside Out Total Immersion Experience

The city of Melbourne is famous for its museum and its collection, but most people, even residents, have only seen a fraction of its exhibitions. During Inside Out, you will go on a journey in the museum while wearing a headset where you will come across exhibit items which have been displayed and arranged in a manner that is extremely theatrical. It is very popular with children, but will also appeal to people of all ages. You get a chance to learn about Australian history in a unique way.

This is a musical adaptation which represents the 1994 classic from Stephan Elliot and which first premiered in Australia in 2006. It has won a number of accolades worldwide, and Tony Sheldon will return this year, who was nominated for his exceptional performance. New cast member Euan Doidge will appear in this edition, as well as David Harris.

Those looking for a great mix of Australian and international cuisine will find it at this event. Held below the Palm Trees near Luna Park, attendees will get to shop for vintage merchandise, as well as handcrafts, delicious baked goods, and all types of food and drinks. As you do so you can watch the sun as it sets by the sea. Melbourne has a number of night markets which are held during the summer but this is one of the most famous.

This floating bar that took Melbourne by storm is back! For those who have never been, this is a large, outdoor eatery and bar which floats to the north of the Yarra River. It can hold more than 400 guests who will have their choice of cocktails, fresh seafood, or pizza which is wood fired. The entertainment is outstanding, as attendees will get to enjoy music from Simon TK and Chico G, local DJs who are known to put out exhilarating tracks.

For many visiting Melbourne this is the real highlight of the summer. It is a concert series which features some of Australia’s biggest names, including The Praetures, Cut Copy and Hiatus Kaiyote. The reason why the event is called the Zoo Twilights is because all the earnings from this summer concert will go towards the conservation of the local zoo and the protection of native Australian animals from extinction.  The event will also have a gourmet picnic. The music featured here is truly fantastic and those interested in attending will definitely want to buy tickets while they’re still available.

Latest posts by Transport Network Australia (see all)
Share On
Tagged with: Summer Attractions In Melbourne